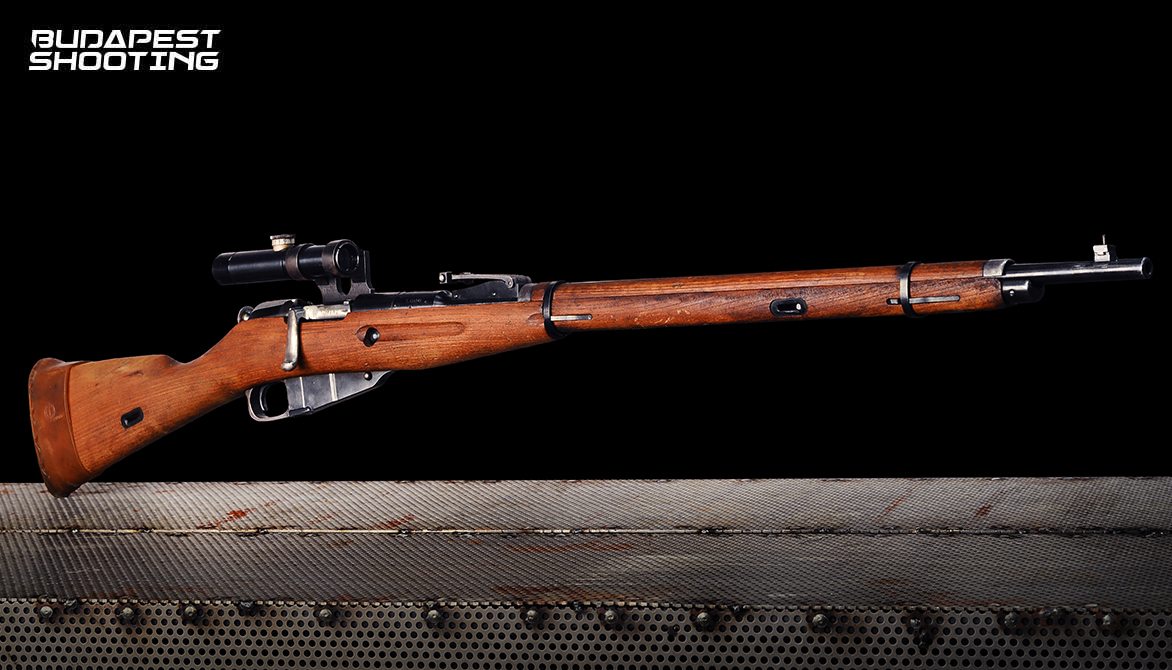 The 3-line rifle M1891 (Russian: трёхлинейная винтовка образца 1891 года, tryokhlineynaya vintovka obraztsa 1891 goda), colloquially known in the West as Mosin–Nagant and in Russia as Mosin's rifle (Russian: винтовка Мосина, ISO 9: vintovka Mosina), is a five-shot, bolt-action, internal magazine–fed, military rifle developed from 1882 to 1891, and used by the armed forces of the Russian Empire, the Soviet Union and various other nations. It is one of the most mass-produced military bolt-action rifles in history with over 37 million units having been made since its inception in 1891, and, in spite of its age, it has been used in various conflicts around the world up to the modern day. It is primarily found chambered for its original 7.62×54mmR cartridge.

During the Russo-Ottoman War of 1877–1878, Russian troops armed mostly with Berdan single-shot rifles suffered heavy casualties against Turkish troops equipped with Winchester repeating rifles, particularly at the bloody Siege of Pleven. This showed Russian commanders the need to modernize the general infantry weapon of the army.

Various weapons were acquired and tested by GAU of the Ministry of Defense of Russian Empire, and in 1889 the Lebel M1886 was obtained through semi-official channels from France. It was supplied together with a model of the cartridge and bullet but without the primer and the smokeless powder. Those problems were solved by Russian scientists and engineers (the smokeless powder, for instance, was produced by Dmitri Mendeleev himself).

When trials concluded in 1891, the evaluators were split in their assessment. The main disadvantages of Nagant's rifle were a more complicated mechanism and a long and tiresome procedure of disassembling (which required special instruments — it was necessary to unscrew two fasteners). Mosin's rifle was mainly criticized for its lower quality of manufacture and materials, due to "artisan pre-production" of his 300 rifles. The commission initially voted 14 to 10 to approve Nagant's rifle. At this point the decision was made to rename the existing commission and call it Commission for creation of the small-bore rifle (Комиссия для выработки образца малокалиберного ружья), and to put on paper the final requirements for such a rifle. The inventors obliged by delivering their final designs. Head of the commission, General Chagin, ordered subsequent tests held under the commission's supervision, after which the bolt-action of Mosin's design was ordered into production under the name of 3-line rifle M1891 (трёхлинейная винтовка образца 1891 года).

Like the Gewehr 98, the 1891 Mosin uses two front-locking lugs to lock up the action. However, the Mosin's lugs lock in the horizontal position, whereas the Mauser locks vertically. The Mosin bolt body is multi-piece whereas the Mauser is one piece. The Mosin uses interchangeable bolt heads like the Lee–Enfield. Unlike the Mauser, which uses a "controlled feed" bolt head in which the cartridge base snaps up under the fixed extractor as the cartridge is fed from the magazine, the Mosin has a "push feed" recessed bolt head in which the spring-loaded extractor snaps over the cartridge base as the bolt is finally closed similar to the Gewehr 1888 and M91 Carcano or modern sporting rifles like the Remington 700. Like the Mauser, the Mosin uses a blade ejector mounted in the receiver. The Mosin bolt is removed by simply pulling it fully to the rear of the receiver and squeezing the trigger, while the Mauser has a bolt stop lever separate from the trigger.

Like the Mauser, the bolt lift arc on the Mosin–Nagant is 90 degrees, versus 60 degrees on the Lee–Enfield. The Mauser bolt handle is at the rear of the bolt body and locks behind the solid rear receiver ring. The Mosin bolt handle is similar to the Mannlicher: it is attached to a protrusion on the middle of the bolt body, which serves as a bolt guide, and it locks protruding out of the ejection/loading port in front of a split rear receiver ring, also serving a similar function to Mauser's "third" or "safety" lug.

The rifling of the Mosin barrel is right turning (clockwise looking down the rifle) 4-groove with a twist of 1:9.5" or 1:10". The 5-round fixed metallic magazine can either be loaded by inserting the cartridges singly, or more often in military service, by the use of 5-round stripper clips.