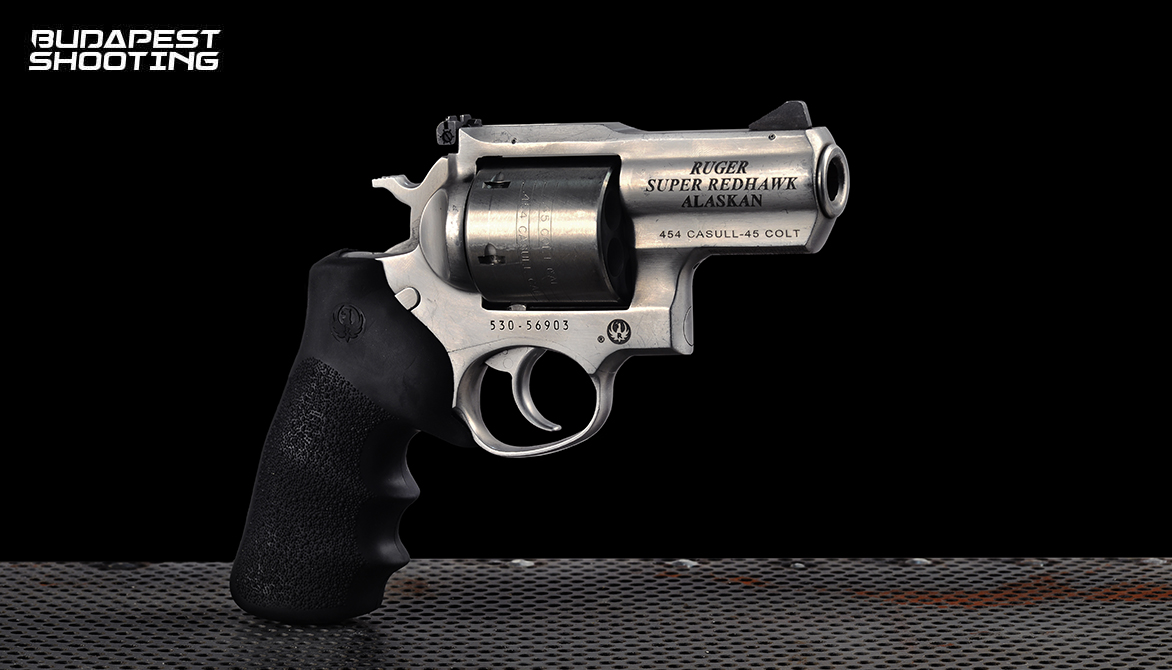 Introduced in 2005, the Ruger Alaskan is Ruger's first short-barrelled, big-bore revolver, conceived by Ruger president Steve Sanetti and intended for defense against large, dangerous animals. The .45 Colt may be an alternative for concealed against human attackers due to the fact it does not possess the capabilities of penetration like that of the .454 Casull. The 2.5 -inch barrel on the Alaskan ends at the end of the frame, and the scope bases are omitted. The interchangeable front sight is replaced with a pinned-in ramp sight, but the adjustable rear sight is retained. The Alaskan is available in .44 Magnum, .454 Casull/.45 Colt, and .480 Ruger, with the .480 model originally a six-shot, replaced in 2008 with a five-shot model to aid in spent cartridge extraction. All Alaskans feature a brushed stainless finish and a Hogue Tamer rubber finger groove grip, rather than the standard GP100 style. The .454 and .480 versions have an unfluted cylinder while the .44 Magnum features a fluted cylinder.

The advantage of such a short barrel is that it can be quickly drawn from a chest holster which is typically out of the way while performing outdoor activities such as fly fishing, hiking, etc. However, the primary trade off for using such a short barrel with a high power cartridge is the loss of projectile kinetic energy out of the muzzle. The factory loaded .454 Casull Hornady XTP is rated by the manufacturer at 1650 feet per second out of a 7.5-inch barrel. The Ruger Super Redhawk Alaskan sacrifices 300 feet per second with its 2.5 -inch barrel.

In August 2009, Greg Brush, from Soldotna, Alaska, was walking his dog when an Alaskan brown bear charged him. Drawing his .454 Casull Ruger Alaskan while rapidly backpedaling, he fired three shots in quick succession into the bear; followed by a fourth and final shot. The fifth round failed to discharge due to a defective crimp where the unfired bullet slips forward in the casing, due to heavy recoil and loose pressure from the cartridge casing, far enough to interfere with cylinder rotation. The animal was stopped 10 feet (3.0 m) beyond Brush's original starting position.